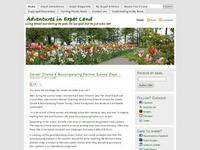 Website Reviews » There are 3 reviews on Adventures in Expat Land

Linda covers the challenges familiar to all expats, often through the kaleidoscopic lens of her personal experience and this is what makes this blog connect with the reader on a deeper level. Whether or not you're interested in life in the Netherlands, her insightful posts will have you coming back again and again... the lessons she passes on are relevant to everyone.

I've been following Linda's blog for a long time. As Aisha says, it's relevant to any expatriate, not just those in the Netherlands. As someone who is also dealing with the problem of elderly parents when living overseas I've been particularly touched by her posts describing her own emotional struggles on this topic.

What I like about Linda's blog is that she does not only write about "being an expat" but also about things relevant to the expat kids: third culture kids. I like the book reviews and the posts on emotional resilience!