Ricky Yates - an Anglican in Prague 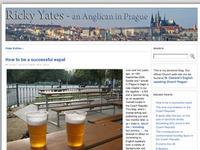 Ricky Yates - an Anglican in Prague
I moved to Prague to become Chaplain to the English-speaking Anglican Episcopal congregation here in the Czech Republic. This blog is my attempt to reflect on ministering to English-speakers.
rickyyates.com
Website Social: 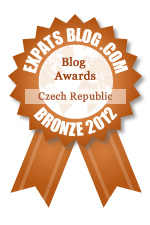 This blog won the Bronze Award for best expat blog in Czech Republic!

Copy and paste code to display the Bronze Award Badge:

Detailed, informative, intelligent and entertaining are the adjectives which spring to mind. What more could readers of the blogosphere searching for a contemporary perspective on life in the Czech Republic as an expat ask for? Given my own experience as one half of an Anglo-Czech expat couple, I've enjoyed reading about the weddings Ricky has officiated at the most. A big thumbs up!

Ricky was my Prague chaplain when I attended St. Clement's English-language church in Old Town, Prague. I love his blog! He comments on church matters, expat life in the Czech Republic, his travels, etc. It's a terrific read with wide readership and he gets lots of comments on his blog because he has such a wide community.

The blog always tells interesting stories, written with an astounding attention to detail. The blog is always insightful and smart, as smart and intelligent as its author!

Fascinating accounts of life in Prague, and visits to other places. For those of us not so widely travelled they're windows on a world we would otherwise not encounter, and Ricky describes things so well - and the photographs are brilliant, too. Although not yet a blogger myself (intending to start, but...) he is a great inspiration and an example to follow. A most worthy contestant for the top award.

This is an excellent blog about what it is like in Prague! It is amazing (and weird?) when I read something Ricky Yates wrote and think "I could have written exactly the same when I lived in Prague!" Except I could not have done it anywhere as intelligently, eloquently or interesting (and a multitude of other similar adjectives!) as he does.

As a long-time English expat in Czecho I enjoy this blog very much. It is interesting, informative, well-written, respectfully humourous and balanced, and gives great insights into engaged Czech expat life as well as the culture, history and places of interest in the whole republic. Ricky answers comments promptly, often triggering interesting exchanges. This blog has my vote :-)

One of the best expat blogs I know.

Yes, when we want a touch of expat life in Prague we turn to Ricky's blog. The quality of the writing is a big plus and the reader can rely on his accuracy, which is uncommon in the blogsphere.

Ricky's blog is an excellent guide to ex-pat life in Prague, one of my all-time favorite cities! His blog helps me keep in touch with this beautiful, marvellous place in between visits! He describes wonderful, out-of-the way corners as well as articulates the love we have for this great city!

Ricky was my Rector when I worked in Oxford Diocese, so ever since he came to Prague to be Chaplain there, I have followed his blog with interest and enjoyment. It is so informative and well written and illustrated that when I visited Prague two years running to act as Locum Chaplain, I already felt that I knew a lot about the city and the culture, instead of arriving as a stranger to both. A very well-deserved nomination and hopefully a worthy winner!

I enjoy reading Ricky Yates's blog because he brings up a variety of fascinating subjects, including the ups and downs of life as a British ex-pat, international politics, and religious happenings. In addition, he always supplies some lovely photos of the Czech Republic and beyond for the perusal of his readers. Although we don't always see eye-to-eye, Ricky Yates is always polite in debate and answers comments within a reasonable ammount of time. He also has a fine British sense of humor which makes it fun to engage in conversation with him on his blog ;-)

Ricky's blog posts are eagerly awaited they are informative amusing and incisive ! Ricky tells it as it is but always with the sensitively of a guest abroad. His insight into Prague customs brings to life in a special way his experiences with officials and restaurants alike and his constant efforts to improve the English translation of Czech menus is most amusing.! ! Ricky's blog also contains some fascinating photos and of particular interest is the rare snow leopards . Ricky, thank you for bringing the ex pat experience to life and giving so much pleasure !

Ricky's blog is just like him, warm, intelligent and funny.

Ricky does a first class job with his Prague blog. He always does an excellent job writing and has very witty commentary. Good luck with the contest!

A really good expat blog that covers a range of relevant issues for expats and anyone interested in the Czech Republic. I particularly enjoy reading about the numerous examples of Czenglish that Ricky encounters!

I am so happy that Ricky is apparently a "hot candidate" for this award - he made me think of us Czechs in ways which had never occured to me before and this, in turn, made me both smile and think. A combination not to be despised. Thank you, Ricky. For a Czech who spends most of his time in the UK these days, it is especially enlightening to be able to share the experience of someone "on the other side of the mirror". All the more so when this someone is as observant and kind-yet-honest♯ as Ricky.

I love reading Ricky's blog, as an expat who lived in CZ for 3 years, I am delighted to 'stay connected' to things Czech via Ricky's insightful commentary and delightful photos. I also really appreciate how many of his readers respond and create real dialog -- something I feel we need to encourage online!

I love Ricky's blog - funny, interesting, insightful. He combines acute observation with an intelligent view on life and religion, while living in one of Europe's most interesting cities, what's not to like?

I have loved Ricky's blog since I first found it almost two years ago. He does an excellent job of giving what is a rare insight into the role of an English chaplain in a nation where English is but a secondary language. Not only that but his posts on various towns and landmarks have really helped me to see the beauty of Prague and the warmth of its people. Thanks Ricky!!

Ricky continues to do a great job blogging about life in Czechland. I always look forward to his informative and witty posts. Good luck with this year's contest.