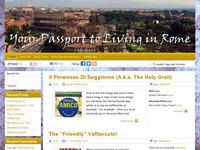 Rick's Rome
Help and Advice for Expats in Rome, with an added focus on Teaching English as a Foreign Language to Italians.
rickzullo.com
Website Social:

Great blog Rick! After reading your posts, I wanted to quit my day job, pack my bags, and leave for Rome!! In my mind, I'm already there!!! Well written!

Nice going, Rick. your entries are really inspiring--one wants to get to Rome as soon as possible. Love the way you compare American and Italian culture. Lots to learn from each each other. A presto

I've been following this blog since the beginning, and it never fails to amuse, entertain and at the same time, give me plenty of useful insights. I'm saving money to go to Italy and try to live there for a while. Before "meeting" Rick, I had no clue about how and if I could actually make this dream come true. I've downloaded his book too, and I enjoyed it just as much. Recommended!

I'm Italian (100%, born, raised, always been, etc.) and what I really appreciated about Rick's blog, beside the subtle humor, is that all facts are presented with very good taste and in full respect of different culture. In my job I often meet foreigns and expatriates, and at times it's hard to bite my tongue when I have to hear their complaints about how they think things should be. Hey, I've been abroad too, I'd have my share of complaints... Rick has it figured: he seems to enjoy differences instead of criticizing. Bravo!