From Countdown to Kenya From Countdown to Kenya
Posts about an Irish girl volunteering in Nairobi. Topics include Kenyan politics, society and culture, my travels around the country and my personal experiences as an 'expat'.
fromcountdowntokenya.blogspot.com
Website Social: 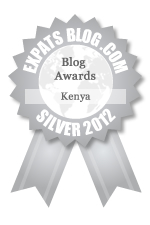 This blog won the Silver Award for best expat blog in Kenya!

Website Reviews » From Countdown to Kenya has no reviews just yet