Piccavey.com - An English Girl in Granada 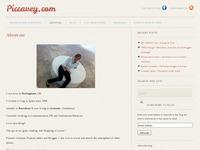 Piccavey.com - An English Girl in Granada
Piccavey.com the blog of an Expat in Andalusia, Spain. Sharing the real Spain. Read my piccavey blog, discover the magic of Granada & the spirit of Andalusia.
piccavey.com
Website Social:

Website Reviews » There are 4 reviews on Piccavey.com - An English Girl in Granada

Molly's blog is great! She really gets to know the places that she visits and includes lots of photographs to make us envious! If you want to learn about diferent parts of Spain, it's food & it's people, make sure you bookmark Molly's blog.

Molly loves her home city of Granada, and it shows! I always enjoy reading all about whatÂ´s going on in and around Granada, and learning about new places to visit. Always current and interesting, this blog is one of my favourites :)

Molly is one of the most prolific bloggers I know - if anything is happening or new in and around Granada, she'll write about it! A must-read for visitors to this magical city.

Molly not only shares her love of Granada but helps others promote their blogs too. IÂ´m looking forward to meeting her face to face one day as sheÂ´s my provincial neighbour.