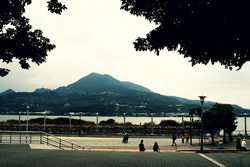 Culture shock â the trauma you experience psychologically and physiologically when you move to another country with a totally different culture. It sounds scary, and honestly, it was a big concern of mine when I made the decision to move to Taiwan, halfway around the world from my home.

Let me break down my expectations versus the reality of life here.

Language barrier expectation â I was fully expecting to be crippled by my inability to speak and read Chinese. Like, not being able to function at all without a translator, getting hopelessly lost in cities, not being able to order in restaurants, etc. etc. etc.

Reality â not that bad. True, Chinese is a much more closed-off language than most. Thereâs no shortcut to pronouncing characters. Were I in France, I could at least tell someone what road I needed, butchering the sounds but probably getting my meaning across. In Taiwan, not so much. That is a genuine difficulty. Fortunately, with public transportation, I only need to know my destination, not how to get there, and for close areas, once Iâve biked there the first time, I have a good enough sense of direction to find my way again. Usually.

I can also function just fine in shops and restaurants on my own. There are some places with menus lacking pictures, but for most nicer restaurants and coffee shops, if they donât have an actual English menu, I can just point to the picture and say, âI want this.â For other shops, thereâs little conversation anyway. I bring the product, you ring it up, give me the total, I pay you. Simple. Itâs actually quite funny; when weâre out with our Taiwanese teachers, they tend to take over and order for us even when weâre perfectly capable of doing it ourselves. I think they have an innate sense of responsibility for us â the foreigner guests.

Food expectation â thinking the food would be identical to our local Chinese restaurant was a little short-sighted of me. Taiwanese food is actually quite different; more oily and with a lot more sea-food. I donât actually like most of it. In fact, I was really worried that my body would react violently to the different food. Iâve had some stomach problems off and on for years, so I made sure to bring plenty of stomach medicine. I was also expecting to lose a lot of weight since I didnât think the food would agree with me.

Reality â while I donât like some of the food, there are plenty of other options available. There are lots of ethnic joints, whether American or Italian, that I adore. They also have plenty of fast food stops, and convenience store goodies have kept the weight on, sadly enough. I think my favorite food so far has been from the Korean place. (Iâm not biased, I swear.) Hot-pot, a traditional Taiwanese meal, is also extremely delicious, and probably my favorite of the ethnic variety.

Even the stuff I thought wouldnât sit well hasnât created many problems. I havenât been really ill since I arrived, and thatâs with me eating some very dubious stuff on occasion.

Physical surroundings expectation â I didnât have a clear picture of what Taiwan would look like before I came. I knew Taipei was an international city, up there with New York, Beijing, Paris, and so on, so I figured it would be similar. But for the rest of the island, having cleared out my head of grass huts and people-driven rickshaws (itâs not China, itâs not Thailandâ¦), I really wasnât sure what to expect.

Reality â itâs different than anything in America. They have farmland and cities, and nothing in between. No real suburbs, since the island is so small and the population density so large. The towns are crowded, with apartments, condos, and shops all smushed together haphazardly, rising vertically to save space. The malls are generally over ten stories, but each story is smaller than an average JC Penney back in the States. Other than that, the only other major difference is the lack of A/C in most places. Homes may have a small unit, but itâs not the all-encompassing indoor atmosphere regulator like it is where I live.

So, thereâs a (brief) summary of what I experienced in culture shock when I arrived. Iâve lived here for eight months now, and I feel pretty much fully acclimated. Or at least as much as I could be without being fluent in Chinese. It was a much smoother process than I had anticipated, and I hope no one ever loses sleep over fears of culture shock. Just be open and willing to learn and try anything and you should do just fine.

Otter is an American expat living in Taiwan. Blog description: This blog is my personal dumping ground for pictures, opinions, and general nonsense. I want to share what I do, what I like about Taiwan, and also inspire others to chase their dreams. Huzzah! Punch the world!
Help to win!