Culture shock: why living upside down means Christmas in July

âCulture shockâ, two words with a big meaning. Iâve lived in both the UAE and Australia over the past few years, and one would presume that the UAE would be the bigger shock in terms of culture, but itâs not true, Australia is every bit as foreign at times.

I recall during my first week in Abu Dhabi wandering about in search of a laundry. An array of strange costumes and languages drifted past me, and I felt as alien as if Iâd just zoomed in from Mars. And as I soaked up the âothernessâ of my surroundings â the cars parked down the centre of the roads, the clacking air-conditioners clinging to the sides of buildings -- I was gripped with fear and exhilaration in equal measure.

Arriving to Perth early last year, I felt a similar sense of fear but not much exhilaration. The place appeared to be one large characterless concrete suburb, with few redeeming features other than a never ending stretch of beach. The houses were an homage to the 1980s â dark, squat, brick -- and I wondered how on earth I could ever live in such a place. I was supposed to be going through the âhoneymoon stageâ of culture shock, where everything is wonderful and you feel like youâre on holiday. I most certainly didnât!

However, a lazy drive up into the beautiful Perth hills â through the evocatively named villages of Kalamunda, Helena Valley, Darlington -- one warm and sunny afternoon solved the problem for me. This is where I will live, I decided there and then, and we found a house on legs half way up a hill soon after, allowing âthe honeymoon stageâ to kick in.

Itâs often the little things which strike you the most when you move abroad, and this is why I took to blogging, to talk about the funny, bizarre and sometimes downright annoying stuff that happens, the stuff what you wonât find in a guide book. Those things we struggle with initially, like customs and language, can cause frustration and even anger, and this is what is called âthe negotiation stageâ.

One of the biggest adjustments for me here in Australia, is living life -- quite literally -- upside down. Summer is winter, autumn is spring, December is hot and July is, well, not quite so hot. 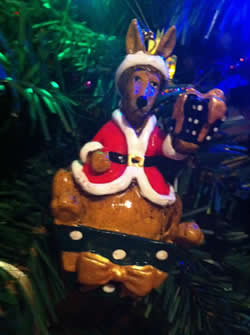 Christmas is simply not the same as back home; it has somehow lost its specialness. To try to remedy this many families in Australia celebrate âChristmas in Julyâ, by putting up a few decorations, buying a few cheap toys for the kids, and making a large roast dinner. We tried this too, and the children took sparklers out to the deck, while Whamâs âLast Christmasâ played on the sound system. However, it simply didnât feel like Christmas, mainly, I suspect, due the small matter of it being July!

What else has surprised me about Australia are the levels of misogyny which exist. âSkimpyâ bars are ubiquitous, for example. Yes, the country that spawned Germaine Greer is infested with topless bars. No wonder she felt compelled to write âThe female Eunuchâ then move to London! And prostitutes advertise their services in the local newspapers â imagine that! Sometimes I wonder if the feminist movement ever happened here. This is in stark contrast to the UAE where a western woman can be reprimanded if she so much as shows her shoulder while out in public (which happened precisely four times during my time there â interestingly twice by greying western woman, twice by local women!) Having said that, Dubai has a thriving prostitution industry, however the powers that be prefer to keep it brushed under the carpet and advertising your services in a newspaper would be tantamount to signing your own death warrant!

Another thing which always makes me giggle is the way young Aussies walk around with no shoes on. I donât mean whilst pottering about in the garden, I mean when they go out to the mall. I find it bizarre that having bothered to get themselves dressed - hair brushed â keys -wallet âphone, they are defeated at the last hurdle. And yes, they have very dirty feet! There is a casual approach to life here at times which makes the Irish look positively uptight!

There is also a level of mistrust here which can be quite irritating at times. I wonder if it has something to do with their convict past. For example, almost every restaurant Iâve eaten in here demands you queue up and pay before you eat, and â shock horror --you are obliged to carry your own drink down to the table!

And when you exit stores like Target or Big W, a woman stands sentinel at the exit, to rifle through your bags to check you havenât stolen anything. I find this process so humiliating that I opt to buy something â anything â just so I donât have to be subjected to this indignity, which when you think about it, is a good sales tactic!

After the ânegotiation stageâ comes âthe adjustment stageâ where you simply get on with day to day life and develop your own problem-solving tactics to apply to your everyday life. You start to view your new culture positively, and those things which irritated you at the start begin to make sense and appear to be normal. This stage takes about a year to reach. The final stage, once you are fully integrated into your new culture, is âthe mastery stageâ.

And so, almost a year and half of living in Australia, have I reached âthe mastery stageâ? Well I may have up until a week ago, however Iâve just hopped back to square one. Last week we left the Perth hills, drove 18 hours north, to the Outback. Weâre now living up in the Pilbara, in a town so small I have no need of a car unless I plan to drive the 80 kilometres to the nearest neighbouring town, and where nobody locks their houses. Basically Iâve moved to 1962 but with Wi Fi capability, and although I couldnât be happier, I realise I am now back to the honeymoon stage, and itâs time to start all over again.

Claire Calvey is an Irish expat living in Australia. Blog description: Mother of five blogging about life, kids and everything. After three years in the Middle East, is now getting to grips with living upside down in Australia. Where to next? Who knows...
Help to win!

Contest Comments » There are 6 comments

I love Claire's blog and enjoy every word of it, every single time I read her work, its amazing how I feel I can relate to it

Good blog. I too moved to Perth a number of years (now about to move to Finland next week), & was struck by the 'timewarp' it seems to be stuck in - from licensing & trading laws, to the quite ramppant casual racism I encountered most days (in & out of work), amongst many other other things. That said, once I'd gotten used to the place & adjusted i.e. planning my shopping trips (as there's little open on a Sunday & not much 24 hour stuff), I soon grew to love the place. I'll hopefully return again one day.

I agree with you Claire, Christmas in Oz is not the same! And I agree (well actually I disagree, haha) on walking around with no shoes! I find it very silly to see people in the city walking around without shoes like if they were just out of the water! Your new town sounds very isolated, good luck!

Yes, December here just doesn't feel like Christmas to an European. Because I was born and raised in Africa, our Christmas were also in summer, so it doesn't bother me at all. It also bugs me to see people without shoes, or young ladies all dressed up with their high heels hanging from their hands and barefoot, because the shoes were probably hurting their feet. Why not carry some flat shoes? Good luck with your life in the Pilbara.

It's nice to hear from someone living in my home country and their experiences of settling in. You will be happy to know that Aussies also hate the bag searching when we go to shops like Target... that's why I tend to stay away from them to. Good luck in Pilbara... that is certainly out bush!

Claire, I love reading about your adventures! Thanks for sharing your unique experiences of exploring other cultures! I look forward to the next chapter, on life in the Outback.