Personal Reflection: Language Immersion Programs in the U.S. vs. International Schools in Cyprus

Last year, our older son (alias name is Piano Man) attended his first day of school in the States at a Spanish language immersion pre-school program. On the first day of sign-up, I waited in line at three oâclock in the morning to get our son into this specialized program because it was on a first-come, first-serve basis. He got into the program, and I was elated that he would be able to immerse himself with other young students in learning a foreign language and culture different than his own. 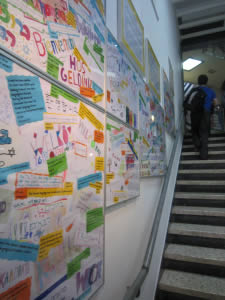 Celebrating Foreign Language Week at our son's school in Cyprus
I was so nervous and yet very excited for Piano Man, as any parent would. After all, we, along with many of our friends, shared photos on Facebook of our little ones going to school on their first day.

However, it was a difficult adjustment period for Piano Man. Following instructions, adjusting in a new social setting, and learning a new foreign language was a lot to handle for a little preschooler. Additionally, I had to let our son figure out how to deal with certain issues, such as dealing with new friendships.

This year, Piano Man attended Kindergarten at an international school in Cyprus. In some sense, I was apprehensive about our little manâs experience in school. Would he make friends easily? Would he be able to handle a full day of school everyday (unlike his preschoolâs two-hour a day program)? What if he encounters difficulty with another student in the classroom?

I donât know what happened from preschool to kindergarten. It was like he was a different kid in Cyprus. He was more confident and assured of himself. He quickly developed friendships with all the kids in the class. He listened to the teachers so much that he even picked up a slight Cypriot accent when he says the same phrases his teachers use in the classroom.

And what about the parents at Piano Manâs school? I thought it would be take longer to build relationships with parents from different cultures (India, Cyprus, Germany, Italy, Portugal, Israel, and the U.S.); however, it was quite the opposite. The parents, many of them expats, understood the difficulty of immersing oneâs self in a foreign country, and they made it a point to include all the kids at a class birthday party and provide a network within in the class to support one another and the teacher.

It has been a wonderful experience in Cyprus to develop encouraging relationships with parents at Piano Manâs international school. Our son's education at an international school has been a completely positive experience, unlike the ups and downs we experienced in his Spanish language immersion preschool class in the U.S. Had it not been a positive experience, our time in Cyprus would have been that much more difficult, and we would have struggled to enjoy our living abroad experience during our short ten-month stint in Cyprus.

Fashionista is an American expat living in Cyprus. Blog description: The Seoul of Cyprus is a blog chronicling the journey of a Korean-American family living abroad in Cyprus.
Help to win!

It's awesome that you guys have been able to find and build community in Cyprus. Piano Man will be leaving with some wonderful memories!