Dubai likes to boast. So it should be pretty easy to put together a top list about Dubai. After all it can offer the Worldâs biggest dancing fountains at the Dubai Mall, shooting 150m into the air. The same mall boasts the Worldâs largest fish tank (or largest piece of acrylic). The indoor ski slope at the Mall of the Emirates is the Worldâs longest. Dubai is also on the edge of the largest desert (The Empty Quarter). In short, Dubai likes its claims to fame; from high-rise living in the Burj Khalifa, the tallest building in the World standing 828m, to the Worldâs biggest residential project, Jumeirah Beach Residence. 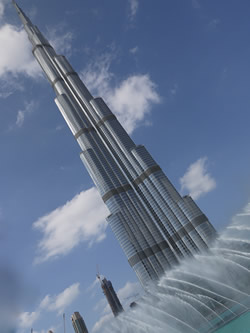 Room with a view: Burj Khalifa and dancing fountains


But what about an alternative list? Dubai is an international travel hub with most airlines making stops here on long-haul flights. It is home to more than 100 nationalities. In short, itâs a melting pot of cultures, which is a doubled-edged sword. On one side you can practically navigate the globe without leaving Dubai, sampling the riches of each culture. On the other, each culture applies its own interpretation of rules, regulations, customs and ethics.

So letâs jump in a time machine and start at the beginning of the regionâs history.

Dubai doesnât really appear on a map until the 18th century, and from a small piece of grit pearls grow. Indeed, it was the pearling trade of this small fishing village that put Dubai on the map in the first place. Muslim, Turk, Mongol and Ottoman Empires have influenced the development of the Arabian Peninsula, and in the nineteenth century the British investigated the region as a strategic base for exercising its control in Europe and India. Having defeated pirates, Britain signed a treaty with local rulers denouncing piracy. The British offered protection in return for local influence and the Trucial States were born.

Dubai is one of seven Emirates that form the UAE (Abu Dhabi-the capital, Sharjah, Ajman, Ras Al Khaimah, Fujairah, Umm Al Quwain). It was granted independence from the British in 1971, and Dubai has become one of the fastest growing and most cosmopolitan places.

So which nationalities have made their cultural stamp and created modern Dubai? What are the alternative places to visit?

Contest Comments » There are 24 comments

Never though of travelling this way. Thanks for the fresh perspective.

It's true you can travel the world while not leaving the shores of Dubai. It's wonderful and challenging. I've learnt more about south Asia, the Phillipines and Europe than I ever expected to.

Great article! I always feel like Dubai is the Vegas of the Middle East. How accurate is that?

Wow- and I thought it was just one big shopping mall! How ignorant am I! Fab article. We'll start making plans for a trip now!!

This was an excellent article. I want to go now! Thanks for Sharing Helen!

Very informative and well written article. Great to hear more about the culture and less about the hotels!

Hi Helen, Great article and bubbly website. Refreshed a lot of great memories. Keep it up. Hope my Linked in recommend helps.

Excellent article Helen. Very informative and interesting. A "must read" for anyone preparing to be an expat in Dubai. Reading about the culture and history of the region was fascinating.

Excellent article well written. Having been in Dubai 2.5 years there are parts I have not ventured into yet and will now take the step thanks to Helen's blog. Can't wait to hear more!

How true! I have learned almost as much Hindi and Tagalog as I have Arabic living in Dubai.

I love Dubai and this is so true. I just hadn't thought how it could be put into words before. Very thought provoking. Thanks.

Great article and good memories of our trip to Dubai. Where next ?!

A really interesting and informative article, which makes you appreciate both the place and the people, and want to scratch beneath the surface.

Excellent website, can't wait to come see Dubai for myself.

The author's passion for Dubai comes through loud and clear in an interesting and easy to read article.

Informative and insightful, an interesting 'insider's view' of life in Dubai.

A great perspective on the opportunities available to us in Dubai. Thanks Helen.

A great insight into what makes Dubai, Dubai! Very useful, thank you.

Very interesting, informative and beautifully written. My parents love Dubai - your blog has made me want to go now.

Dubai hasn't been on my travelling list before - it's now been added. Thanks for the insights Helen!

What a fantastic article. There is so much more to Dubai than I thought. Dubai will go on my list of places I must visit.

Very enjoyable read! It's wonderful to see a new city through an experienced traveler's eyes. Thanks for sharing!