Top 5 Ways To (Not) Be An Offensive Foreigner In Korea

Teaching English in Korea seems to have become a launching pad, or at least a stepping stone, for so many debt-ridden college grads hoping to find adventure and financial relief on the other side of the world.

With these foreignersâincluding my husband and Iâcome cultural differences. If your desire is to NOT be offensive to the country that is giving you the chance to live pretty luxuriously while destroying your debt, youâre in the right place.

Today I give you my top 5 ways (in no particular order) to not be an offensive foreigner in Korea. 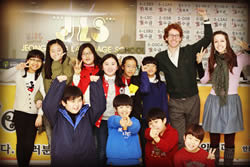 I say âTop 5â because there are plenty of ways to be an offensive foreigner, but most of those apply to any country you visit:

Being a drunk, noisy, aggressive creeper
Not learning minimum words in the local language
Imposing your cultural idealism onto their culture
ETC ETC ETC

If you want to be the best ambassador for your culture and home country, go out of your way to be super polite. Iâm sure Iâve still managed to offend lots of Koreans, but following these five Korean-specific tips, hopefully you, too, can offend less people than normal in your travels or teaching in this beautiful country.

**Disclaimer: I have never been to other East Asian countries, so maybe these apply across the board, but Iâm only writing about my personal experiences in Korea. Of course, some Koreans are not offended by these things, but take it as general advice and just use good judgment**

How helpful! It's the nuances like these that you read about, but aren't really sure how they're played out daily to the locals. Great article!

I didn't know that Japan was also feuding with S. Korea over islands. Here in China they are fighting over the Daioyu/Senkaku islands.

Great top 5! The passing of business cards with one hand is considered impolite in China as is PDA an uncommon sight. As Amanda says, it's also a feud between China and Japan over islands!