Top Ten Things to Do with Kids in Panama!

Note 1: These things are also awesome fun without kids!
Note 2: These activities are all either in Panama City or less than 30 minutes drive away. 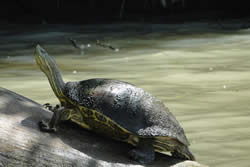 Turtle as seen from our Monkey Island Tour Boat

Jane Ellis is a Scottish expat living in Panama. Blog description: I moved to Panama from Scotland with my husband and three children in the first half of 2010. An opportunity came up for us to move here, so how could we say no?
Help to win!

A "Chucky Cheese" is now in Multiplaza and includes child-friendly rides and games for all ages.