In an episode of Portlandia, two people stumble upon an unusual restaurant called Around the World in 80 Plates. The menu is oversized, both in its actual physical size and in terms of how many dishes are included, and the hungry couple canât make sense of it. They eventually leave, still famished, overwhelmed by all the choices they have to make before ordering. This funny sketch pokes fun at the excessive focus on the individual and choice that is often found at US restaurants.

One of the great things about living in a city is actually a lot like what Around the World in 80 Plates offers: choice. There are so many options, and there is often a melting pot of co-existing cultures. That's why I've put together a list of the best kinds of international cuisine you can find in the city I call home, Milano.

I know what you're thinking: Why would anyone with access to one of the world's best cuisines , Italian, be interested in anything other than risotto, pizza, pasta, gelato and the wide variety of regional dishes available throughout the peninsula?

Hereâs my answer. Iâm lucky enough to have close friends who are great cooks, a husband who has been trained in the fine art of Italian primi and secondi, in-laws who are masters of Milanese and Napolitano staples and my own personal curiosity to learn a few things around the kitchen from all these wonderful people. The result is that when I go out to eat, I donât usually choose Italian food. Why go to a restaurant when I can produce a similar kind of meal at home?

And because Milano is considered one of Italyâs most international cities, there are indeed lots of options for anyone who tires of pizza, pasta and risotto (even if that might take weeks, if not months). So, if youâre a visitor or an expat, hereâs my take on taking your taste buds on a round-the-world voyage â without leaving town. 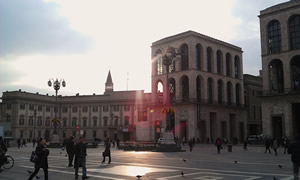 
There you have it, the top 10 international cuisines in Milano. Due to a lack of personal experience or a lack of space, there are some international regions that do have a hefty in presence in Milano but that didnât make it on my list. Honorable mention goes to:Â Indian, Sri Lankan, Swedish, Greek and Argentine.

And if you're only going to be in Italy for a short period of time, do taste some of the excellent Italian cuisine â and save your trip around the world in 80 plates for another time!

JL Walker is an American expat living in Italy. Blog description: Why Italian bureaucracy is like being the hero in your very own role playing game
Help to win!

It would appear that you hit 'hit the nail on the head' so to speak.I must say that I was very impress and cant wait to pay a visit to Milano!