There are so many wonderful places to visit in the Loire Valley that newcomers to the region often need guidance. Itâs pointless saying âChenonceau is my favourite. You should go thereâ or âForget about Chambord, thereâs nothing to seeâ. Each of the chÃ¢teaux is different and visitors will be attracted to one or the other according to their own individual tastes. My aim here is to give an idea of what each has to offer so you can make your own choice. 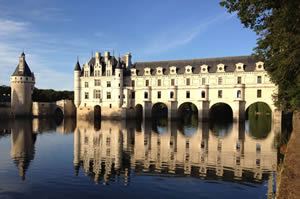 I only intend to talk about the âpleasure castlesâ here, and not fortified castles such as Chinon and Loches, religious edifices such as Fontevraud lâAbbaye, or mansions such as Clos LucÃ©. Iâll start with the four âCsâ: Chenonceau, Chambord, Cheverny, Chaumont, followed by the royal castles of Amboise and Blois, all of which are located in the same general area, then Azay le Rideau, UssÃ©, and Villandry, which form another geographical group, with ValenÃ§ay off on its own to the south.

Lovely post Rosemary. My family and I just visited the Loire Valley during last year's Toussaint holiday and we loved it. We saw all the C's for sure and Blois too. Cheers from the south of France, Aidan

Lovely post! I'm often asked for recommendations on what to visit and why, and always hate it giving my own in case our tastes are not the same ;o) Now I can farm out responsibility to the wonderful Mme Kneip, who covers the probably unanimous top ten with judiciously bite-sized morsels.

Wow! What a comprehensive to-do! A great introduction... I have not visited this area before, but it's high on my list now. And I'll have a print-out of this page in my bag!

Wow! An amazing amount of information...definitely enough to plan a fantastic road trip. Thanks a million!

Well done Rosemary, Not an easy task! You did a great job.

So many informations and nice photos , thank you for such an invite to visit our beautiful area,

Great overview of the major chateaux. We were at Azay le Rideau and they have refurbished two rooms with a beautiful four poster bed with all its textile hangings recreated and rush matting on the walls and floor. Really worth a visit.

Thanks for the excellent article, Rosemary. I'll be re-visiting the area in a few weeks time so will definately print the informative article. Thanks!

I live in the Loire valley and I can attest that Rosemary's list is spot-on !