An American at the National University of Cordoba 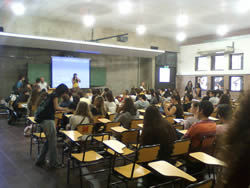 Intro to Psychology at the National University of Cordoba
Argentina offers free higher education. That in itself is a major incentive to move here, but things arenât always what they appear to be.

I had this misguided impression that the National University of Cordoba was going to take me in without a hitch. After all, Iâve lived, studied and worked in the United States. So why wouldnât they welcome me with open arms? I quickly learned how misguided that way of thinking was.

First of all, I needed to get my degrees apostilled in the United States, translated to Castillian in Cordoba, and validated in the Ministry of Education in Buenos Aires. This is a process that I have yet to complete before enrollment begins in late 2013. Thatâs right! I learned that you canât simply enroll at the university any time during the year. You only get one shot. Enrollment begins in November and ends in December. If you miss it, youâll have to wait an entire year before enrollment begins again. In the meantime, I was able to attend classes as an observer, which they call an âoyenteâ.

Over the past three months, Iâve been an observer in three separate careers. The first class I attended was in anthropology. Unfortunately, a lot of the conversations from the teachers dealt more with Argentinian politics than it did with actual anthropology. So I moved on to the career of English translator.

The teachers had a basic textbook knowledge of British English but had no interest in American English. This conflicted with my general American English because British English and American English are different in a lot of ways, especially in the phonetics (the way words are pronounced). The biggest issues I had were with the way the instructors pronounced words and how they used certain words in sentences. Even proving I was correct with a dictionary didnât help. The language and grammar lessons fell short of my expectations. Unfortunately, most of the instructors have never actually visited an English speaking country and they have no native speakers teaching at the language center of the university. Therefore, it proved very difficult to correct them when they made obvious mistakes. So after some serious soul searching, I decided to move on to another one of my passions, psychology.

The first week of class was merely an introduction of the instructor and how the psychology courses would map out over the next several weeks. The second week involved listening to the instructors discuss an issue that has the faculty and the students in conflict. It turns out that the faculty wants very badly to get their degree programs validated and accredited so that graduates can work beyond the province of Cordoba. However, the students are against this because they feel that the National Government would dictate whatâs required of them to study in order to successfully get their degrees.

I admit that I couldnât understand the point of view of the students. In the States, going to a school that wasnât accredited was the worse thing anyone could do. It meant wasting time and money to get a degree that was worth less than toilet paper. The credits would also be invalid for transfer to an accredited university, but there was no way I was going to publicly argue with students who are so firm in their position.

Iâve learned that Argentinian students hold a power in the universityâs government that Iâve never seen in the United States. The reason that a studentâs voice holds so much power is because decades ago it didnât. Back in the 1970âs, a military dictatorship took over Argentina. Any books that inspired someone to revolt against the government were burned. Free thinking students who voiced their opinions at the universities were hunted down and killed by the military, but the dictatorship no longer exists. So now, decades later, students have more power in the universityâs decision-making than the actual faculty itself.

As an outsider, itâs difficult for me to understand or appreciate the political stands that drive so many students and class discussions at the university. One thingâs for sure, if you can get past all the protests and political discussion, youâll get to the core of the major you want to excel in and succeed. I personally struggle with understanding the grammar, the slang, the jokes, and the politics. Despite these obstacles, the university has a lot of career choices to offer and plenty of student benefits which I hope to be able to take advantage of when I officially become a student in 2014.

Interesting take on a "guaranteed" ability for a higher education.

Informative, well-written article. Interesting insight into educational systems outside of the U.S.