If youâre the sort of person who is often jetted off to some new foreign clime by a global conglomerate, to be met on arrival by an army of relocation agents, chauffeur-driven cars, nannies, personal chefs and the like, then this article may not be your cup of tea. On the other hand, if you fancy dipping your toe into the choppy waters of international employment then it might just lend a hand. And while it is always wise to remember that if it seems too good to be true then it probably is, there are places on the European continent which seem to have brushed off the current economic woes wreaking havoc through the old empires. And Geneva is one of them. Not forgetting the rest of Switzerland of course, but the focus here is on a place which is an open door to European job seekers. Or is it?

Perched on the western shores of Lac LÃ©man, or Lake Geneva to you and me, is a gilded city seemingly brimming with cash and opportunities. Following a somewhat textbook entry into the expat world through ski repping and then taxi-driving in France voisine, I turned my attention towards a place which draws in many thousands of French people every day, who cross the Swiss border to take advantage of salaries which are easily three-times higher than they can get back home. And with the Swiss Franc still as strong as you like against its younger cousin (the slightly under-par euro), these salaries are now worth even more. To number crunch for a moment, a typical Swiss wage of 5,000 francs a month is now worth a thousand more euros per month (â¬4,000) than it was before the pickle involving the financial markets. Even if your mathematical skills are as meagre as mine, you can quickly see that this is a â¬12,000 annual pay rise for doing nothing extra.

But what comes up, must come down, right? For sure, and the exchange rate fluctuation has hurt Swiss exports, cue a somewhat tepid intervention from the Swiss National Bank which buys squillions of euros every day to try and convince the markets that the Franc isnât that good after all.

Which it is? Well, yes, in a storm and all that, Switzerland is more than a fairly safe bet and is not only small and wealthy but unlikely to get involved in some major international conflagration. Apart from playing about in the Alps with guns the Swiss Armyâs only meaningful task is to guard the pope (popes?!) and they pretty much count on the fact that it will probably not kick off in the Vatican any time soon.

So not much danger of them joining the euro? Hmmm, I think not. As a landlocked country in the heart of Europe, the Swiss are more likely to start digging towards the Mediterranean, Ã  la Suez Canal.

Getting back to the point, Geneva is then an expat workerâs paradise? Letâs look at the whole story before we decide on that.

It is certainly a lot easier in theory to get a good job there following the agreement that was reached with Europe in 2007 to open up the borders. Before then you had to live within a fifty kilometre radius of the border to be considered by the Office Cantonal de la Population for a work permit. All that has changed and the numbers of frontaliers (people living in France but working in the Helvetic Republic) has increased dramatically, especially considering the job markets elsewhere.

Right. So I could be living in Ayia Napa and still work in Geneva? Yes, in theory, providing you recover from the all-night partying in time for your flight. You could fly in every Monday bright as a button and stay locally, fly back every weekend for whatever raves may be on offer, earn â¬4000 a month and sit on your terrace at the end of it all with a cigar and a glass of the local plonk and consider yourself worthy of the cherry on the cake.

Iâm sensing there must be a catch..., am I right? Yes pretty much. You see the thing is the OCP (the permit providers) are fairly luke-warm about giving away their precious permits so they are only really easily available to those who have an EU passport. There are ways round this of course, particularly if you have a penchant for Swiss millionaires and end up marrying one.

Time to overlook a few little personality flaws? Well, quite.

So if you do make it through the myriad of red tape, what sort of jobs are available? English teaching is certainly a first port of call, but due to the salaries and the numbers of interested candidates, schools can demand a lot of qualifications and experience. Itâs not the same as if you rocked up in Tanzaniki to offer your services.

Where?! Oh, never mind. Suffice to say there is a lot of competition. Add to that a large collection of international companies, the banks, the watchmakers, I.T companies and of course the impressive number of international organisations (like the UN) who are always looking for English speakers, particularly (but not exclusively) if they speak French and German. Once on the inside of these hallowed walls (it pays to know the right people to get inside incidentally), you can set about either saving the world or organising paper-clips, depending on your level of ambition. Both pay handsomely.

And what do you do? I teach English and do office work for local language schools â to both adults who were hoping against hope years ago that English wouldnât become the international language and to their offspring who are generally much more motivated and adept at learning languages.

OK, so Iâm nearly packing my bags but hit me with the down-sides. OK, if youâll forgive me this is better in list form.

Sorry? Yes, it is illegal to only have one guinea pig in Switzerland, as they are social animals. I also nearly forgot to mention the high fines for bad driving â it cost me â¬200 for driving in the bus lane (when I was frustrated in traffic) and the authorities take a very dim view indeed of speeding.

And if it all goes wrong? As the working hours are longer than France (most working hours are!) and the employers have more flexibility to hire and fire, losing your job is indeed a possibility. This will not mean that you will be cast out onto the street overnight as the Swiss unemployment pay 80% of your old salary for up to 2 years. If you live in France the figure is nearer 60%. Welcome to the world of high social contributions â after all, someone has to pay for all this generosity.

One last question â whatâs Geneva like as a place? Despite occasionally having the look of 1980âs Warsaw, it has some pretty areas, such as the old town (pictured). 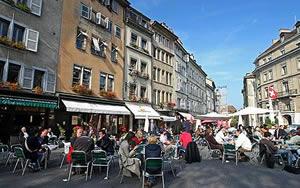 There is a large expat community but many I have spoken to think of Geneva as a good place to live rather than work. It is such an international place that at times the feel is somewhat soulless. Barcelona it is not.

In conclusion, I would say to those who now feel inclined to dip not only a toe but perhaps a leg into the world of working abroad to seriously consider Geneva while understanding that gold there is, but Eldorado is a fantasy land and like anything thatâs connected to real life, there are always aspects which arenât exactly perfect. But bearing in mind the rapid descent of France into la misÃ¨re, we should feel lucky to have been welcomed, if not perhaps enthusiastically, into the Swiss bosom.

Vince Everett is a British expat living in France. Blog description: The Intrepid Rosbif is a blog written from the French Alps in the shadow of the Mont Blanc by a long-standing expat who hails originally from Birmingham, England.
Help to win!