Don't be duped by a great sales pitch!

I don't even quite know where to start?! I will try to write this post without mentioning any names, much as I feel I would like to! I also apologise for any terrible grammatical errors etc, but I am shattered! Although, if you read my blog you are probably used to these by now anyway ;)

Having received my visa last week I was keen to seek employment as soon as possible! The $2500 required by the Canadian government to be in your bank account will not get you very far so it is necessary to gain employment asap.

So I had a frantic few days of job hunting and was amazed when I received an interview offer for yesterday from a promotions company! Along I went, feeling hopeful after having done my research. I bought new interview clothes, stationary and made sure my hair and make up was interview-worthy and off I trotted! 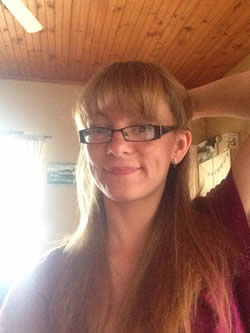 Look how excited I was, taking photos so I knew how my hair would look best! Attention to detail is so important for a job interview.
It was a great first interview. They bulled me up immensely telling me my CV was exemplary and that I Â was one of their preliminary candidates. They told me that they were going to sign me up for the second interview based on my CV and interview straight away, breaking their protocol. They told me that I would be working on the charity side of their business, which was a charity close to my heart and I was looking forwards to being able to do something worthwhile. They told me that I might be considered for a higher position if my second interview went well.

Today, with more new clothes purchased that were suitable to being 'on the job', I took the bus to my second interview. I was told I would be observing the work done by others in the same position I would be offered and a trainer would accompany me to evaluate me and offer hints and advice etc.

It was awful! The trainer was 7 years younger than me and had only been working for two months at the company. It was like being taught how to suck eggs. She was a lovely girl though so I stuck with it. Basically we went to the car park of a retail park, set up a stall and tried to sell a product through direct marketing. Which, in this case, meant chasing people around and trying to demonstrate the product, from which a tiny proportion went to charity. I had been misled completely. The wages were based on commission and career development was basically just selling more of the bloody things! The charity side of things was nothing like it had appeared, it was basically just the tiny proportion of profits from selling the products that went to the charity.

Within 30 minutes I had seen enough, but I was stuck in a different city without transport. I had to be there until 6pm. Fortunately the store manager kicked them (not us, he and I actually had a good bit of banter and a giggle about the whole thing) out. He also had been misled about the charity side of things and didn't like his customers being chased all over the carpark. I took the opportunity to say this wasn't for me and the girls I was with dropped me off (miles from home, I had to catch the longest bus).

On the bus on the way home I sat next to a lady who may have been slightly crazy or slightly intelligent as she liked to talk to herself a lot. I confided to her about my hell day and she asked all about myself. She then proceeded to give me career advice. I should stick with child care, she said. It is what I love doing. It is what I am passionate about. I miss teaching so much. Maybe this slightly crazy lady was actually an angel telling me just what I needed to know at just the right time?

When I got my visa I was told the only thing I was not allowed to do was work in the sex trade. I can't see how direct marketing in this way is much different. I felt uncomfortable and as though I was selling my soul. Even if they offered me a billion pounds I would not do this job. Well....maybe for a billion...

I feel like Canadian employers like you to volunteer your time and services a lot before they decide to hire you. This is a great way for both parties to decide if they are making the right decision. However, I feel I must advise that you mustn't allow yourself to be taken for granted and something is not right, say so! I was so desperate for employment that I allowed this to happen. I feel like I will be more picky in future, based on this experience, regardless of whether it takes me a while to find employment.

Holly Nelson is a British expat living in Canada. Blog description: This is a blog detailing my move to Canada from England for love...
Help to win!