Top 10 things to DO & NOT DO on St. Patrickâs Day in Ireland

Top 10 things to DO and NOT DO on St. Patrick âs Day in IRELAND (or any other day you may be in Ireland).
cÃ©ad mÃ­le fÃ¡ilte (a hundred thousand welcomes)
Irish are very welcoming and warm people and love tourists, even those that never go home. 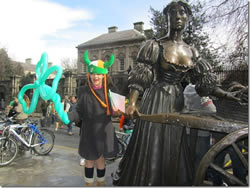 It wouldnât be uncommon to bump into a celebrity anywhere in Ireland, Irish donât fuss over famous people, so more and more famous people are holidaying in Ireland. You often hear stories from Taxi drivers and the general public of how they rubbed shoulders with the rich and famous.

One story the other day was how âBruce Springsteenâ who tends to do a concert in Dublin every year, puts on a cap and just strolls around Dublin without anyone recognising him, and has been known to pop into a pub or two for a pint of the old black stuff.
In fact this year he is not doing a concert in Dublin but Cork, Limerick, Kilkenny and Belfast you can get your ticket here: www.premiertickets.ie/events/580/Bruce-Springsteen-Tickets.html 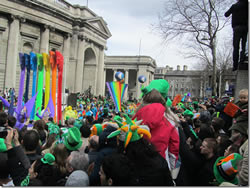 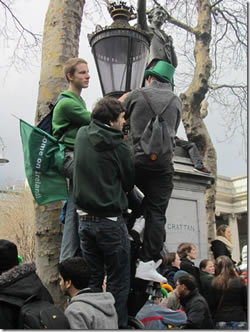 
It was harder to think of the DO NOTâs than the DOâs either way you will love Ireland and especially Dublin come for the craic (thatâs pronounced crack by the way and has no reference to the drug), the criac is anything enjoyable. An Irishman will start off a conversation with âHiya, so whatâs the craic?â
Best times to visit are early Spring âSt. Patrickâs Dayâ through to May / June â weather is changeable, but then NOBODY comes to Ireland for the weather, expect 4 seasons in one day and dress for them.
Months that have been drier than others recently are March, April, May, September, October and even November.
Halloween originated in Ireland, so the Irish go all out for Halloween.
In fact I canât think of a month that you shouldnât come to Ireland except maybe January and February, they are dark and bleak.

Wondering Woman is a South African expat living in Ireland. Blog description: Mainly about life in Dublin although I do tend to add a bit of South Africa (Home) to my blog, generally just day to day life and stuff that pops into my head.
Help to win!

I love the pat about the directions being given by names of pubs. Too funny!

Hi Wonderer, I enjoyed your Irish list of Dos and Don'ts. My family live in Montpellier,France now but we spent five wonderful, cloudy, rainbow, drizzly years in Bray, a small seaside town south of Dublin next door to DDL in Co. Wiklah! We loved it and I while the weather sent me to the south of france, i wouldn't trade one moment of our time in Ireland. You're right about the sunny days....I've never seen any more beautiful place in my life. Good luck with the contest. Aidan

Ha ha, so funny - I don't like to mention Bono too much, so reckon I would fit right in!!