My family of 5 recently became expats in The Netherlands at the end of 2012. We have a 4 year old boy and 2 year old twin boys in tow. When faced with our living options, we could choose from any number of larger cities surrounding Tilburg (the location of my husband's job). True to our lives as doing the unpredictable- we chose a path in a smaller village on the outskirts rather than seek the shelter and community of a bigger city with a larger expat presence. 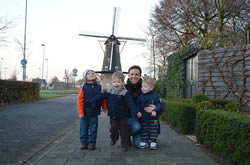 Farrah and her boys at the Kerkhovense windmill in Oisterwijk.


Why? Sometimes because I think we're crazy.. other times I think we just have the most astounding luck imaginable.

Oisterwijk boasts about 25,000 inhabitants- which also includes the area surrounding Moergestel and the community of Heukelom. With that many people- you might think that we weren't the only Americans living here, but in essence that's exactly what we feel like and I mean that in the best way possible.

10 Reasons Choosing to Expat off the beaten path in the Netherlands is a great idea.

Farrah Ritter is an American expat living in Netherlands. Blog description: Twins + One and Everything Else... I have 2 year old twins and a 4 year old. We just packed up and moved overseas to try our hand at living in Europe. Parenting/humor/Europe travel included.
Help to win!

Perfect 10! I can absolutely relate to each one of your observations since we're living in a similar sized town off the beaten path. Totally agree anyone can be an expat in the big cities, but it takes courage, patience, and sometimes a whole lot of beer to adjust to life in a smaller town. Your whole list is great but the two that made my laugh the hardest were #5 & 7. I always go to the same check out girl at the Albert Heijn. I think she gets a kick out of the way I try to pronounce "dank uuuuuu vel" and I love how she pronounces in perfect clear and focused English, "Have a nice day." The spa one was great too. I checked out ours a few weeks ago thinking they'd have a swimsuit area, NOPE, it was like I was in Germany all over again. But I was past the point of no return, so there was no turning back. Not sure if my butcher was there though, I didn't strike up too many conversations. Great stuff! Good luck!

It sounds like your "crazy" family absolutely made the right decision on where to live in the Netherlands! I love the idea of riding bicycles everywhere...and love the idea of eating whatever I want even more!