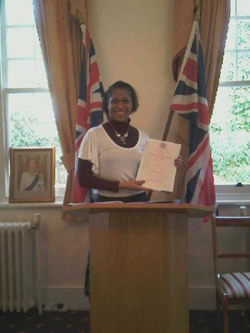 For as long as I could remember Iâve always wanted to leave my homeland, Trinidad. I never seemed to fit in. The fact is Iâve always read extensively and reading opened up a world that by nature I couldnât help but want to see. However, years of living a relatively protected life put a damper on my pursuit of flight, untill I was in my late 20âs. Having been through two failed relationships with no major responsibilities and no debt, it was the best time to make a change. Around that time Iâd changed jobs, applied to a few UK universities and gained unconditional acceptances from all. I needed to decide which offer to take and how I was going to pay for it all. Â As fate would have it, Iâd become friends with an English colleague at the art gallery where I worked, as a Library Technician. She arranged for me to board at her family home, in Cambridgeshire, while she continued to live in Trinidad. Back then there was no Facebook or Twitter. I used ICQ chat rooms to talk to people based in London to make enquires on the weather what clothes to pack, how to get around etc. Armed with the information I gathered in the months run up to my departure, I left Trinidad 8th September 2001.

I arrived in Heathrow on September 9th 2001 on a Working Holiday visa. My ticket was one-way, as I didnât want to give myself a âget out clauseâ. Iâd have to make work hard for my ticket home. Travelling to England was my first big adventure away from home but I felt Iâd arrived home. I realise this is a strange notion for some people to understand. However, coming from an English Commonwealth island itâs only natural to feel an affinity to England. Untill then, Iâd only been to a few islands in the Caribbean with family or friends. It was my intention to study for a Master of Arts (MA) in Publishing, after working a bit. The house I was staying was in Harston, Cambridge. It had a large garden. I loved it from first and I was made to feel like part of the family, so I settled in quickly.

They say that you always remember where you were when a major life event occurs. Usually when âtheyâ refer to a major event these days, itâs the death of Diana, Prince of Wales or September 11th 2001. Well, on the morning of September 11th 2001, I was awaking to my second day in England. I awoke to catch the news headlines and I saw a plane crash into a tower! I stood stock-still waiting for the story to unfold. As the news emerged it turned out I had just witnessed via BBC news one of the planes that hit the World Trade Centre in New York. It was a terrorist attack! There was talk of retaliation, talk of war and all sorts. I was scared out of my mind. Despite my anxiety I carried on with my plans. My friend's mum took me sightseeing around Cambridge town centre, on the Monday. I saw the main places of interest and then I joined a walking tour of the town. On the Tuesday I signed up with a few job agencies. Â It was during this process I found out that I needed a National Insurance (NIS) number. So, I tried to find my way to the Benefit Office, in order to apply for my NIS number. Still thinking in islander terms, I assumed that I could walk into the office and get the ball rolling. Fortunately or unfortunately I got lost, the rain poured and I was soaked head to foot. Feeling half frozen in the chilly September wind, my brain kicked in. I called the office for directions and was promptly told I could not visit the office without an appointment. On the Wednesday I stayed at âhomeâ with my phone on speed-dial to the Benefit Office. Â I got an appointment for the following week and on attending my appointment, providing my passport, visa details and proof of address (a letter from my mateâs mum), I was posted a temporary number (TN). Â Armed with my TN, I began looking for work and by the end of week two I was gainfully employed by Marks & Spencer in their Lingerie Department. Â I had one weekâs training before I was set upon the British public. To this day Iâm grateful for that training; it really prepared me for customer service. Some months later, just before Christmas, I landed my dream job. I was to work for Cambridge University. I would be a Library Assistant in the Classical Faculty Library. I was over the moon! Â The job was advertised as permanent, however, due to the restrictions of my Working Holiday visa and the fact that Iâd worked for two months at Marks and Spencer for at 27 hours per week (over 25 hrs work per week was/ is qualified as full time), my contract was altered to 12 months.

I stayed in Cambridge for 10 months before relocating to London. Back then all it took was for one piece of unidentified luggage to cause a security alert. I was constantly on edge. I remember on one such occasion, an alarm went off when I was in the ladies loo of Victoria coach station. For what seemed like minutes I forgot how to get out of the toilet! Then a small voice in my head said âbe calm, be calmâ, the fog in my head cleared and I found my way out onto the streets as the station was being closed. Â While in London I temped as an Administrator in adult education, for a few months. I returned to Trinidad, for a spell in 2003 with a view to putting things in place for my return home but that was not to be. Everyone had moved on and opportunities that were available for a trained Library Technicians like me had dried up.

I returned to London and lived in various flat-shares. This experience made me mature quick time. I guess you could say I became a woman, in London. I learnt to: cook, manage my money, âkeep a homeâ and gain new skills at work. It was during this time, I travelled to various parts of Europe on bank holiday weekends. The only downside was the additional trips to the relevant embassy of the country I planned to visit, in order to apply for a Schengen Visa. The Schengen would all now me to enter countries in within the European Union but the first port of call would have to be the country that issued the visa.

I never did get that MA, despite saving a fair amount of my salary. It was never enough. An MA for an international student costed as much as Â£10,000 for tuition alone. However, on a student visa I achieved an ABE in Business Administration, while working part-time as an Administrator. During this time an old school friend introduced me to a work mate of hers. Â We texted, emailed, dated for a few years and eventually we married.

When I think the thousands of pounds Iâve spent over the years in visa costs, and the hours of sitting in Home Office waiting for my interview and so on, my heartaches. Boy oh boy! Did did I get the grilling of my life when I applied for my indefinite leave-to-remain visa. I went into that interview with two folders of all manner of documents. I even put tags on the pages of my passport. Howâs that for efficiency?! And still I was asked for some random thing that was not even on the list with the application. I thought hubby was going to throttle the interviewer. Not that he could break her glass cubicle though, but for a few brief seconds I had visions of him being pinned to the ground by Home Office Security. Thankfully, there was a fair amount of space between our seats and her cubicle. I quickly whispered to him to calm down, and with a firm grip on his leg I explained why I didnât have the item. I had so much paper work with me that another item sufficed to prove that Iâd been in the UK for the stipulated time and was living in the same home as my husband. It was well worth stress to go about things the right way though. My heart swelled with pride the day I became a British citizen and the national anthem was played.

I believe that in the expat community friendships are vital. Iâve managed to maintain some friendships Iâve had from my high school and university days, as quite a few of my mates are based in England. I donât have any blood relatives in UK, so my husband and my friendship network have kept me grounded over the years. When my first child was born, it was my friends who rallied around and supported hubby and I. My son Angelo now has a long list to âauntiesâ and âunclesâ he can rely on. Iâve slowed my pace significantly. For the time being I donât have any travel plans. However; Iâve found a new type of satisfaction as a âmummy bloggerâ. England is now my home, that of my son and soon to be born daughter. Â Iâm truly happy.

Please note that this essay merely states my opinion of my expat experience. The terms and conditions to various visas would have changed over the years. Iâd always advise checking with the relevant embassy of the country you wish to visit or emigrate to for correct and up to date visa information.

I'm an expat mum, originally from Trinidad, West Indies. I now live in the Greater London, England. I have a blog named Tiger Tales which is about my son, Angelo, and I. The blog covers my parenting experiences, as well as product reviews, recipes, and activities.Â
Blog address: http://tigertales-msxpat.blogspot.co.uk/ Twitter: @MsXpat
Vote for this: