From Thailand to Italy 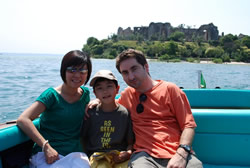 My wonderful journey started, thirteen years ago, when I decided to marry my Italian boyfriend and to transfer to live in his country. At that time, thanks to my studying in Italian literature in my university, I already knew a little bit about Italy and its culture. However, who in the world doesn't know Italian food, Italian artists, Italian fashion, the Roman Colosseum, etc?? Italy is always among the most popular destinations where Thai people dream to visit once in life.

Mine wasn't just a trip as a tourist, but it was about the beginning of a new life! My adventures began with the preparation of all papers needed for the marriage in Italy. We decided to marry in his country because the process would have taken too much time in Thailand but he couldn't stay too long at Bangkok for his work in Italy. I, instead, was going to leave my work, so I had time to prepare everything. Moreover, we were going to settle down in Italy, so we thought it was logic that way. My parents were happy for me, so they also agreed on this.

I, then, had to apply for the tourist visa to travel to Italy. I'd heard before from other people that the officers there were the hardest scrutinizers among all the embassies in Thailand! They certainly had to be very strict in order to avoid future illegal activities. I assure you that it wasn't easy at all! At that age, I didn't have a great sum of savings yet, and that made things becoming difficult. My at-that-time British employer was so kind to write me a very nice recommendation letter. I was afraid things would go wrong but when my spouse arrived at Bangkok (He was in 1-month vacation), he went to meet the officers and presented his documents and his letter to confirm my future residence. After that, they kept silence for a while. When we turned back to ask for the progress, fortunately I met a Thai officer who was very kind and she did help a lot. In one month, I got my papers translated by a licensed agency and legalized by the Consul and the 3-month tourist visa. At the end, it wasn't as hard as I had imagined before. For the rest, I packed up things and called my best old friends and relatives. It was a big surprise and a confusion at the same time. I didn't even know how to explain, it was a little bit of mess but everybody was very happy for the news. My family organised so quickly a nice and memorable ceremony for us. It wasn't an official one but it was the greatest thing in my life! My parents-in-law-to-be flied to join our ceremomy at Bangkok too. Sometimes, unplanned things are better.

Then, I found myself in a small town of Italy namely Piacenza, in the middle of the enchanting atmosphere of Autumn. The climate was quite different from that of Bangkok. I felt cold. I needed time to adapt myself to the new temperature, the cool wind and the fog! Every new thing attracted me a lot. I began to know new people, new neighbours, new friends. Little by little I've learnt how to behave and how to begin a conversation with them. Piacenza is situated in the North of Italy, at the south of Milan. Its number of population is a little more than one hundred thousand. At the beginning we lived in an apartment in town. Many might not know that Piacenza is the eldest city of Italy. It's quite old-fashioned; the streets are narrow, old churches and buildings are everywhere and you'll find many stoned-streets in the centre of the city. (High heels are not recommended!) You won't see any modern skyscrapers for sure. Out of town, fields and houses are alternated and ancient constructions often come to your sight. All these were very enchanting for me, as a former inhabitant in a huge and chaotic city as Bangkok. In our living zone, there were many small groceries, butchers, newsagents, supermarkets, etc. In the morning, when I went to buy some food or to have a walk, I noticed people's behavior, so that I learned the way of living here. This was one good point of living in a small town like this because it was easier to socialise, the contrary of living in a big city where one do his/her own affairs and where people are always in a hurry. As my own experience, most of people in my living zone were friendly and they seemed to be curious to know me too. Each of them asked me âAre you Chinese?â or âAre you Japanese?â I found no one speaking English. However, I was lucky as I was able to speak Italian, although not very well at that time. For this reason, I didn't have much difficulty to communicate and to make friends. My Italian improved quickly thanks to my husband, my parents-in-law and the television! If you continue to register what you hear, you'll become good at it automatically.

The funny thing was that, my neighbours (elder ones) showed kindness to me and some of them felt concerned of my life, so far away from home. They asked me how I could contact my parents and if we already had telephone in Thailand. The elderly Italians are very sensitive. They surely didn't know well about my country. They just might have seen some TV documentaries of villages at the borders of Northern Thailand where they still lived without electricity, or we can se without civilization. I explained them how was my city like and they seemed stunned. Once I was asked if we really rode elephants to go everywhere. Perhaps 13 years ago, Thailand was not known in other aspects by Italians yet. Lately, the TV programmes have presented Thailand's amazing places, Thai culture, Thai food and the modern cities such as Bangkok. Now, people's expressions changed. They says âOh! You're from a wonderful country, what are you doing here!!â

When we were expecting a baby, we began to make plans. We dreamt of living in a lovely house that offered the possibility to our kid to play in an open space and a better environment. A house in a rural area sounded great and affordable too. After some researches, we bought the house where we've lived for over 11 years already! Until now, we've found this place very suitable to grow children. There're 2 kindergartens and a primary school. There're 3 small parks and playgrounds. We've tightened a relationship with other families with kids quite easily. We're glad that we made a good choice.

Now that our only son is becoming a teenager and he began to go out alone, we're not too concerned. We feel more safety here than in the city. However, every time we visited Bangkok, he has always been attracted by the contrast of the simplicity and the modernity of the city.

I, former expatriate, have become a local person. Although Bangkok is always my first home, here is home for me now. I may not have success in finding a good work, but I'm totally successful in my family life. I really can't ask for more.

My name is Jindapen but I'm known as Mee, the nickname given by my parents since I was born. I'm Thai by birth but Chinese by origin. I've been living in Bangkok for 23 years, then I had to follow my boyfriend (now husband) in Italy. I'm currently living in the North of Italy.
Blog address: http://meeinitaly.blogspot.co.uk/
Vote for this:

I'm usually writing as a hobby just because of a pure passion. When I heard about this writing contest, I was immediately interested to participate. I admitted that at first, I didn't have a clear idea on what to write but later I decided to tell my own story just in a simpliest way. I really enjoyed writing this article because I felt as if I had travelled back to the old time ;)

What an impressive story! Someone said that words can't describe what someone's feeling for real and for all, however, I can feel the power of LOVE from her words...word by word...character by character. I'm deeply impressed by her wonderful writing.

I found this writing very enjoyable and impressive. Good narrative with fulll of information, picture and feeling.

You makes me thinking of traveling to Itlay ^^ It' s so romantic that you decided to leave your hometown to start your new life with your beloved one there.

This is the clear, simple but warm-at-heart story. Really like it. ^^

It's so pleasant to read such a genuine piece of writing. I can feel that you wrote it from your heart. Thanks very much for sharing.

I do love your clear words describing your lively and lovely family life. You made me think about some nice phrases from a song .... I have found my home here in your arms Nowhere else on earth I'd really rather be Life waits for us share it with me The best is about to be And so much is left for us to see ^___^*