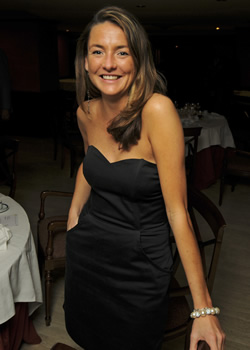 When I moved to Spain it was April Foolâs Day, I was 22 (about to turn 23), and had never been to mainland Spain before. A few months previously I had whimsically applied for some jobs in the sunshine whilst sat at my dreary London desk, listening to my clichÃ© Ab Fab Gucci-clad boss screaming another hail of insults at one of my Public Relations colleagues, and accidentally got accepted for a role in Spain. My new job title was Marketing Executive at (now defunct) Ocean Estates International Marbella. The resignation was handed in and the suitcase hauled out.

Now in those days, 2002, easyJet wasnât too bothered about how much your case weighed, they just slapped a luminous orange HEAVY sticker on it if it broke the scales. Mine weighed in at a hefty 37kg and contained everything I could possibly need for a new life in the sunshine - one plate, one knife, one fork, one spoon, one saucepan, one can opener, flip-flops, bikinis, a towel, shortsâ¦ - except for wet weather gear. Which was exactly the first thing that I needed.

I had in my head that it didnât rain in Spain, but when I stepped off the plane and drove the âwrongâ side of the road in a hire car in a torrential downpour, I realized my head had clearly absorbed too much of the Spanish Tourist Board hype, I had been duped â it was hammering it down.

My Mum had wangled me to stay in a holiday apartment for a week, it belonged to her friend from Church choir. The choir lady said it was ânear Marbellaâ. I have soon learnt that everyone says that to make their holiday apartment sound swankier than it is (a trick I went on to employ whilst marketing Ocean Estates Internationalâs wares). It was in fact in Mijas Costa, almost 45km from my office-to-be in Puerto BanÃºs (see, even they lied when they said Ocean Estates International MARBELLA), and right now the sea was a vile shade of brown as the mud slid from the mountainsides into the Med. âWhat have I done?â immediately sprang to mind.

Day one I laid out all of my Good Luck cards, Spanish phrase book and Costa del Sol guide on the kitchen table to help me focus on why I was there, in the rain. I laid the suitcase on the floor and unpacked a few bits and bobs before chinning a glass of wine and drifting to sleep. Around 3am I awoke to the sound of driving rain, whipping wind and rattling window frames. Glancing at the floor, I thought, âthatâs shinier than I thought it wasâ, and how right I was. The entire apartment was submerged under three inches of water. Turns out that horizontal rain + old Spanish-fitted windows and doors = flood. From 3am to 6am I shivered brushing water out of the apartment over the terrace. My suitcase was soaked and every single Good Luck card had drifted into the wet mess erasing the sentimentally inked heart-warming messages in the process. âWhat have I done?â again sprang to mind.

Day two I drove the 45km to Puerto BanÃºs I introduced myself to my new boss and colleagues. I had a stylish dusky pink skirt suit packed and in mind for the occasion. This was hastily swapped for a fleece, jeans, Spanish supermarket-bought trainers and a face that screamed âI spent the whole night de-flooding my apartmentâ. The boss later told me I looked like a âlibrarianâ. He genuinely did not recognize me, walked straight past me in reception, when I turned up to my first proper day at work two weeks later. I wasnât offended, I was grateful.

The two week delay between arrival and working is a well-known one in Spain. You cannot start work without a National Insurance Number (NIE) and they take two weeks to process. In 2002 people were literally queuing down the streets to get their NIE from Marbellaâs (then) notoriously inefficient Police Station. If you did not get there well by 6am (I kid you not) you would not get one of their allocated tickets to be seen that day. And, finally when it was your turn, you went through the ridiculous charade of a) âI canât see you I canât see you I canât see youâ (this is the funcionario â public worker â faffing at their desk, chatting to their pal and above all, avoiding eye-contact with you, this makes you involuntarily cough to attract attention), b) being asked to fill out two forms with identical information, asking politely if they have a photocopier, being tutted and sneered at in response, and c) asking to borrow a pen, seeing six in a pen pot next to their computer, and being told point blank âI have no penâ. Oh, and they donât accept money at the Police Station to pay for the NIE so you have to go find a bank and then come backâ¦ to the back of the queue.

With NIE in process and time up on the choir ladyâs apartment in Mijas, I spent two very lonely weeks with no friends and no colleagues living in a hotel. (The housekeeping, however, was a boon. You cannot imagine the pleasure a now 23 year old gains from never having to make her bed or wash her towels.) Time was filled looking for an apartment, a permanent place to park my 37kg suitcase.

If you look at todayâs Costa del Sol, you will see row upon row of empty, some half-built, apartment blocks begging for an inhabitant. âSe alquilaâ (for rent) signs are scattered across the landscape and you can pretty much name your price as the landlord will, for sure, be desperate. Rewind ten years and it was a VERY different story. Construction was underway, little was completed, and affordable rental properties were like henâs teeth. Upon seeing a property you liked, if you didnât say âyesâ, sign the contract and hand over fists of euros for the security deposit, first monthâs rent and greedy agentâs fees, there and then, you could be sure that a few hours later someone else wouldâve done just that. It was a desperate time.

With a budget of 500 euros a month (you could get a nice two bed two bath with communal swimming pool and gardens for that now) pickings were slim. I was dithering over a ninth floor apartment with a pull-down bed and touching-distance view of the neighbouring blockâs brick wall when some kind Ocean Estates International person tipped me off about a soon-to-be-available one bed on Marbellaâs âSalvador Daliâ street, or Avenida del Mar as the street map would have us call it. I hotfooted over.

This tip-off was bitter sweet. Sweet - almost beachfront Marbella, a bare-footed skip and a hop to the sea and bang on budget at 500 euros a month. Bitter â the patio doors never closed, ever, bits of the concrete balcony periodically fell off onto the street below, the blue carpet (carpet? in Spain?) was disguised as a filthy black carpet, you could not swing a tea bag, let alone a cat, in the postage stamp kitchen and every piece of the bathroom suite was a different colour â pink bath, peach loo, blue basin and, my personal favourite, an avocado bidet â and donât get me started on the brown floral tiles. But, as all good property TV shows brainwash, location location location shone through and I signed.

Marbella life gradually looked up. I settled into work, had 250-odd colleagues so there was always a birthday to celebrate, business was booming, houses were flying off the shelves and all the international media eagerly lapped up my press releases about property in this land of milk and Spanish honey. The rain faded into a distant memory, trainers gave way flipflops and lunch hours (two hours actually, hurrah for the siesta) were spent on sunbathing using the beach shower to freshen up before returning to work. This was the life Iâd imagined, and I made sure all my former co-workers and friends back in England knew about it â via constant texting, there was no FaceBook craze back then.

I also settled into my flat. The carpet was self-scrubbed to a respectable level, I became very dexterous in the kitchen and not so much of the balcony fell off so as to cause real alarm. I even grew to love my avocado bidet â until it vanished. Yes, vanished.

Being borderline OCD I am a double-check triple-check kind of girl when it comes to taps, electrics, locks and so on. So when I went on a three-day trip to Paris, I am a gazillion percent certain that the apartment was left safe and sound. When I returned, overnight bag in hand, I unlocked the door and headed for the loo only to find my bathroom, well, missing. The landlord had removed everything, toilet ânâ all, without informing me.

Ruling out hallucinations or delirium, I started to investigate and found the multicoloured items lined up neatly on the balcony. Crossing my legs and gritting my teeth, I walked into my Spanish landlordâs nearby restaurant and shouted a angered âquÃ©?â. He claimed that I had âleft the taps running and caused a flood that had âdestroyedâ the apartment belowâ. He also suggested that I might like to pay for the damage. Now, I knew this was tosh and the more likely scenario was that some of his oh-so-good plumbing had just given up the ghost and failed. So, I suggested that he might like to give me my deposit back and find another tenant.

Ten years on Iâm still in Spain, albeit across the Med in Mallorca, so the funcionarios and the landlords of this world havenât quite managed to put me off just yet. And, lucky for you, if youâre eyeing a move to the sunshine, youâll be delighted to hear that improvements have been made and Spain is being dragged kicking and olÃ©-ing into the 21st century. But, be warned, it still rains, so donât forget to pack that umbrella. I wish I had.

Me. Sarah Drane. Currently resides Mallorca. Director of www.purplecakefactory.com. Specialist in real estate, marine and travel PR. Award-winning (won Best PR Company Spain 2008 in the International Property Awards in association with CNBC but suspect I was the only entrant). Writer for publications such as A Place in the Sun magazine, MarinaLive! (Gibraltar) and Telegraph Expat. Publisher of client corporate magazines in particular for the yachting industry. TV presenter for the lesser known www.ntve.tv. Appeared on BBC Radio, BBC1 and Channel 4 as a property expert, blink, and youâd have missed me. Unless youâre my mother in which case you regularly haul the DVD recording out. Native Brit. Spanish speaker. Spurs fan. Drinks a pint in 3.5 seconds to impress in bars.
Blog address: http://www.purplecakefactory.com Twitter: @PurpleCakeFacto
Vote for this:

Contest Comments » There are 6 comments

The Spurs fan and the pint did it for me

Ahh but we love it for all its quirkiness (even the rain in Spain!) Good read Sarah

I'll give you 10/10 for true grit ... lesser mortals would have packed their bags and flown back to the land of their birth!