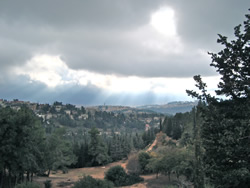 I picked up a glass water pitcher. Shifting it from left to right hand I tested its weight. I glanced at the sign advertising the item as the VÃ¤nlig when I started to feel a bit lightheaded. For a moment the room swam before me and I was overcome with an eerie unmistakable feeling. I have been here before.

Snapping back to my senses I reminded myself, no I have not been here before. I am in a new city in a strange country. Sure this Ikea might look and feel like any other, but this can be explained by globalization and the widespread appeal of affordable, modern Swedish design. Walking back to my cart to deposit my newly selected VÃ¤nlig, I realized what had brought on my feeling of recognition. I had bought this pitcher before. Three apartment and two cities ago, I bought this pitcher in an Ikea just like this one.

Most of my adult life has been spend on the move. (Admittedly, the period over which I can boast to call my an adult is short.) At first, my attitude about moving was a brazen why not? Why not go some place new for now? Temporarily moves present obvious advantages for someone looking for adventure, variety, and new experiences. The disadvantage of this strategy became quickly apparent: Where was my home?

My decision to make Israel my home started as a personal dare. I was just investigating the absurdity of this dare I told myself as I searched for a job, a work permit, and an apartment. As the pieces of my new life fell into place, I continued to expect the entire plan to fall through. My disbelief was a useful trick. Before I had time to talk myself back from the ledge, I had already taken the leap.

At the time, I thought that my reluctance to settle in a foreign country had to do with fear of sameness. Once I relocated for the long term, the adventure of living abroad would stop. Life would become familiar, boring, the same. However, with the wisdom of hindsight, I now see that the main source of my reluctance was a different, even contradictory, fear. I was afraid of having to truly engage with a new place. Living in different cities for only a short time, I found it possible to float above the deeper experience of being a local. A temporary resident can avoid municipal bureaucracy, skirt community obligations, and get by with poor language skills. Without even realizing it, I had avoided these experiences in other countries in the name of convenience and with the excuse of I donât really live here. But by living on this level I had missed out on what makes living abroad truly an adventure. I had bought the same pitcher twice because I was shopping in the same store.

In Israel, I am determined to really live here. This determination has helped me overcome cultural, bureaucratic, and economic hurdles. With a little determination, the hurdles arenât so big. Before I first arrived, I had made a careful plan for delivery of my furniture to my apartment. My plan seemed in peril when I learned that the apartment building required tenants to schedule timeslots for large deliveries. In a panic, I called my landlord for help. âWhatâs the problem?â he asked. âNo one stops you.â Unsure of whether he understood the situation, I started to explain further. He cut me off immediately: âJust do what you want and ignore anyone who says you canât.â And then he hung up. This is easily the best piece of advise I have gotten about living in Israel. Many, many, many times, a goal seemed difficult or impossible because of a stated rule, policy, or procedure. But policy as stated is not policy as practiced. I saw this first as the movers delivered by furniture without a hitch. I see it again in virtually every transaction.

The second most valuable lesson I have learned is do not assume that things work like they would in another country. This lesson is often difficult to apply because the line between âfunctionâ and âexistenceâ can be difficult to identify. My experience with the Rav Kav shows I mean. The Rav Kav âisâ an electronic transit card. For weeks I coveted this card. It had a slick logo and a microchip. I would watch with jealously as passengers swiped it on trains and buses. I had to have one! The difficulty of getting a Rav Kav only made it seem more tantalizing. Rav Kav offices had inconvenient and inconsistent hours. Tuesday 10:00 â 14:00, Wednesday 15:00 â 19:00, Thursday closed. (?!!) Even worse, I would arrive at 9:59 on Tuesday to get the card, but find either a line out the door or no one there. When I finally tracked down an open office and got to an available clerk, what did I learn: you must have be an Israeli citizen to obtain a Rav Kav.

This is only a test. Remember lesson one about living in Israel.

Five minutes of yelling and gesturing later, I had a hot new card in my hot little hands. What to do first with it?! Yes, indeed, what to do with it? The Rav Kav, I soon learned, does not work like the Metrocards or Oyster Cards of the world. It works in strange byzantine ways that I struggle comprehend. But, I can easily explain how the Rav Kav does not work: You canât put money on it and use that money to pay for rides.

My disappointed with the Rav Kav presents an interesting problem. Is the Rav Kav a crazy Israeli transit card? Or, is the Rav Kav so fundamentally different from what a transit card should be that it is not a transit card at all? These are deep existential questions. I have entered into the same inquiry about other features of Israeli life including the emergency room, car ownership, and property taxes.

Yet in these challenges is the reward and adventure of living abroad. If I had really wanted a Metrocard I could have stayed in New York. Certainly, I sometimes miss the convenience and familiarity of things I grew up with. Sometimes I watch American tv and eat frosted flakes for breakfast. Okay, I even still shop at Ikea. (Really, who doesnât?) You donât have to give up your previous life to have a satisfying expat experience. The key is to engage with the world around you. With deeper, more meaningful interaction an expat can find an adventure and have a home.

Liz Morris is originally from New York City and currently lives in Tel Aviv, Israel. Her hobbies includes running, cooking, and curling up with a good book.
Blog address: http://www.moonoversomewhere.com/
Vote for this: